A few private yachts and cruisers have been braving the elements this week as well as the usual trawlers and working craft. The cruise ship 'Lord of the Glens' glided quietly by with passengers looking forward to their Easter break. I don't think they will be doing much sunbathing on the upper deck though as the temperature has dropped to single figures again and snow is forecast for next week on lower ground. When we moved up here 14 years ago it was snowing in April then and we thought it was really wonderful.
The birds have been singing their hearts out lately and it can be really noisy at certain times of the day, making you feel as if you are in the tropical rain forest somewhere. Flocks of colourful green and yellow siskins have arrived and are gorging on the sunflower hearts on the 'siskin roundabout'. 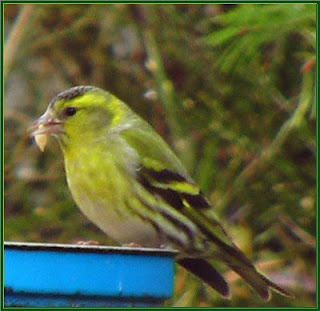 Down at Loch Garten Osprey Centre EJ, the female osprey, has recently returned to the nesting site for the 8th season and is awaiting Odin her mate. The Osprey Centre opens on April 1st and is a good visit as you can watch these magnificent birds on the giant webcam as they dive for fish and bring up their young.
We will be looking out for Ollie - the osprey who has a nest somewhere near Loch Ness as we often see him from April onwards hovering over the loch looking for a fishy lunch.
Posted by South Loch Ness Local at 1:42 pm No comments:

The weather has been improving lately and we have been able to sit outside although a jacket is required due to the chill off the water. The temperature has been into double figures and the forecast is for it to stay that way but with the possibility of a ground frost some nights. Had a few rain showers which has washed alot of the snow away from the mountain tops opposite and the roads are quite clear now. A very windy weekend here and a spectacular wind speed of 113mph was recorded at the top of Cairn Gorm. 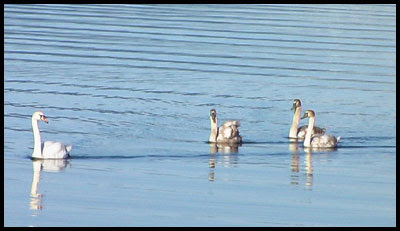 The level of the loch has been high although the family of resident swans near the pier seem to be enjoying life. We are looking forward to this Sunday when the clocks go ahead one hour so it will be lighter later. The other evening a young deer set all the automatic lights off on the driveway although he wasn't bothered. 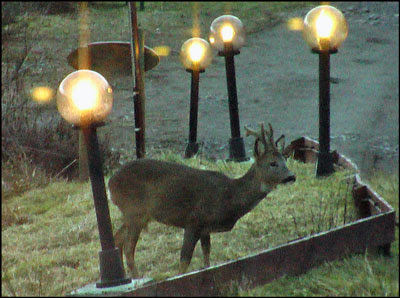 Posted by South Loch Ness Local at 3:57 pm No comments: 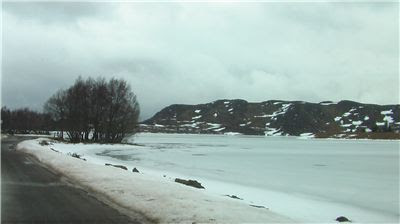 Our aim last Thursday was to drive to Fort Augustus and have a leisurly walk through the woods by River Oich. When we reached Loch Tarff we were surprised to see it still frozen with thick ice and it was noticably colder. A bit further on we spotted this stag on the hilltop giving us the eye. 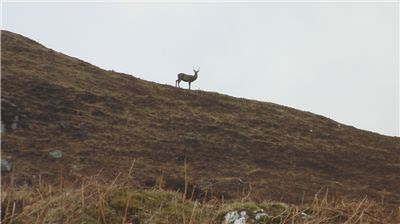 Even further on the weather started to close in and ahead of us was getting rather dark with rain laden clouds so we turned back. The view from the top was quite beautiful though. 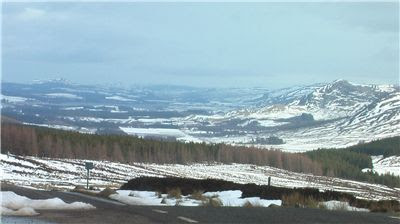 Posted by South Loch Ness Local at 3:10 pm No comments:

On three of the coldest days of the worst winter for 30 years Fred MacAulay and Dougie Vipond set out on a Sport Relief Challenge. Their challenge was to paddle a tandem kayak the length of the Caledonian Canal from Fort William on the west coast to Inverness on the east coast of the Highlands of Scotland. Unfortunately at 8am on day one [22 Feb] they found the Canal at Neptune's Staircase near Fort William was frozen solid with thick ice so they had no option but to carry their 25 ft boat and paddles and walk alongside the canal. They covered more than 7 miles by lunchtime mainly by foot and managed to pitch their tent near Loch Oich for the night. On day two we just caught sight of them as they passed our house in their kayak with a TV crew in the parallel orange craft.They made better time than we expected and nearly caught us out. Above them was a TV crew in a helicopter filming scenes of the Great Glen for the forthcoming TV programme. Although the temperatures were well below zero day and night the sky remained a clear blue so the Great Glen and Loch Ness should look spectacular in the film.


Unbeknown to us they actually camped on Farigaig Pier for the night...we thought they would stay in Dores village or camp on the beach - so Farigaig Pier could be famous at last!
This TV programme is called 'Up a long Creek' and is to be shown this coming Wednesday 17th March on BBC1 Scotland from 9 to 10pm - so do take a look.
We do have guests coming to Aspenwood later in the year who asked if they could bring their kayak to launch in Loch Ness during their stay. We informed them that they can easily walk down the grass track from Aspenwood Cottage to Loch Ness beach with their craft or drive down and then leave their kayak at our house overnight for safety and convenience as we are nearer the shore of Loch Ness.
Posted by South Loch Ness Local at 12:27 pm No comments:

Turning off from the Daviot road we travelled south down the A9 on our way to Pitlochry. We were surprised to see that either side of the A9 was still heaped with thick snow and that the hillsides were still deeply covered. Strange to think that just a couple of weeks ago lorries were nose to tail on this very stretch of road with drivers sleeping in their cabs during a terrific blizzard which hit the east coast of the Highlands of Scotland very badly. We passed the turn off to the Highland Wildlife Park at Kincraig on the A9 and thought of Mercedes the polar bear, the latest permanent resident of the Park now enjoying his retirement from Edinburgh Zoo. He must have really be in his element in this recent long cold spell of weather.......so at least someone is very happy. The 90 mile journey down the A9 was smooth and very picuresque with very little traffic and the snow near the road ceased only about 10 miles from Pitlochry. We make a twice yearly pilgrimage to MacDonalds Butcher's where we can be assured of good quality Aberdeen Angus beef as well as superb lamb and bacon, although you can order online. While waiting for our order to be processed we drove up near the golf course above the village and had our sandwiches and coffee by the side of the pond. Surprisingly the pond was still thickly frozen except for one tiny gap and the ducks seemed very glad of the food I had saved up for them...another happy lot.

Posted by South Loch Ness Local at 7:28 pm No comments:

Stag in the snow.


On the way to Daviot today we spotted this magnificent stag illuminated against the glistening white background. The fields on either side of the road to Daviot are still covered in quite thick snow even though the area around our house on the banks of Loch Ness is now finally clear after a very long winter. We wondered just when the snow will finally disappear from these fields on the higher ground. From Daviot we turned right onto the A9 and took a trip down to Pitlochry.....but that is for another day
Posted by South Loch Ness Local at 5:42 pm No comments:

Inverness is the 'capital of the Highlands' and was designated a city status in 2000. The River Ness flows from Loch Ness through the centre of the city and out to the Moray Firth. There are a significant number of churches on both banks and the snow capped mountain of Ben Wyvis can be seen to the north.
The city itself is dominated by the red sand stone castle proudly overlooking the river.
The present building only dates from about 1836 but it was built on the site of an original 11th century defensive structure. It is not open to the public and is used as the Sheriff Court.
Opposite the castle is St Andrews Episcopal Cathedral which was intended by its architects to be one of the grandest buildings in Scotland. However, funds ran out before the giant twin spires of the original design could be complete so hence the rather unfinished appearance.
Next to the Cathedral is the new Eden Court Theatre which we have been entertained in a few times. Cross over the Ness on one of the many bridges and you can walk along Ness Bank with hotels and restaurants looking out onto the river. Our favourite is 'Contrast' Restaurant which we just have to visit now and again to see if the food and service is kept up to standard....and we can report that it was.
See a more detailed history of Inverness.

Posted by South Loch Ness Local at 11:55 am No comments:


The guests who came to visit us last week during the blizzard also braved the elements during their holiday and went to Chanonry Point on the Black Isle where they were lucky enough to see about 15 bottlenose dolphins.
It is one of the best dolphin spotting sites in Europe with a large resident population of bottlenose dolphins.
Chanonry Point is a spit of sand that juts out into a narrow but deep channel of the Moray Firth opposite Fort George. Here different currents converge bringing fish close to the surface and thus the dolphins close to the shore. Prime dolphin spotting time is the hour or so before high tide as the dolphins come in on the tide in their hunt for food.


Bottlenose dolphins are very adept at leaping clear of the water often in unison with other dolphins in their group and can sometimes put on a spectacular display. Although we have been to Chanonry Point several times we have not always been lucky enough to see them as they cannot be guaranteed to show. Even so - there are picnic tables to sit at and enjoy lunch while watching and hoping for them to appear.

Angie, Michael and Nikki kindly sent me these photos to use.....so thanks very much.
Posted by South Loch Ness Local at 11:59 am No comments: