The following information and photo was sent to us by the Loch Ness RNLI.

Timothy Spall (Harry Potter, Alice in Wonderland, Auf Wiedersehen Pet) and his wife, Shane, will be filming on Loch Ness today as part of their adventures for Spalls At Sea, a documentary about life aboard their 50 foot Barge as they travel around the coast of Britain.
They have a film maker embarking during the day today and Loch Ness RNLI Lifeboat will be on the water during this event.
Tim and Shane are great supporters of the RNLI and have been calling in at RNLI stations and meeting the volunteers as they travel.
Loch Ness has been a very much anticipated highlight for the duo and they plan to be in the area for the Glen Urquhart Games and Gathering on Saturday.
Last night they met the crew of the lifeboat and witnessed a training exercise. 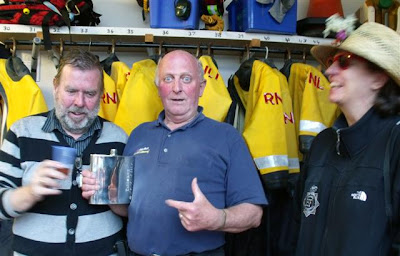 Posted by South Loch Ness Local at 12:10 pm No comments:

The 'NESS EXPRESS' RIB [Rigid Inflatable Boat] is operating in its second year and is again proving to be very popular for those who enjoy a thrill on the water of Loch Ness. The 'Ness Express' One and Two both seat 12 people and are safe,comfortable.very fast and operate from April through to November.
They now do various trips, the most popular for our guests has been the hour and a half trip from Fort Augustus up to Urquhart Castle and back. We know the times of this trip and as they zoom in front of the house we wave at the excited passengers and driver who wave frantically back. We feel like we are out of the film 'The Railway Children' so we call ourselves 'The Rib Children'.
Oh what fun we have. 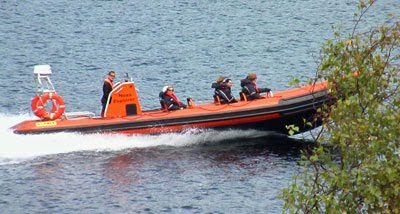 Posted by South Loch Ness Local at 3:08 pm No comments: 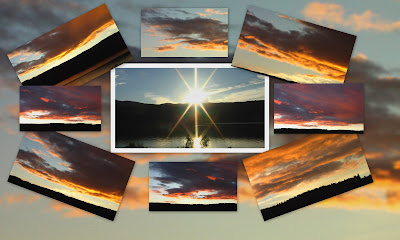 As we sat outside yesterday with a wee drink at the end of the day we watched the sun setting behind the mountains opposite and the sky changed colour from light pink and all shades of orange to deep red. These colours were reflected in the water of Loch Ness and it was better than watching television. We never take living here for granted and it is so nice to be able to share it with all our guests who come to stay in the cottage. Hopefully our guests staying in Aspenwood Cottage at the moment also witnessed this amazing light show possibly from the decking area overlooking the loch.
Due to a cancellation there is a week this September still available....Saturday 18th to Saturday 25th...who knows what magical show will appear on Loch Ness then.
Posted by South Loch Ness Local at 1:09 pm No comments: 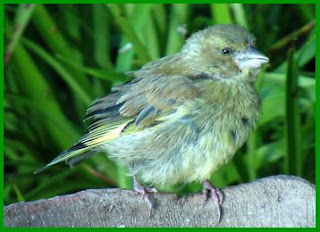 Noticed an unusually large round scruffy juvenile bird resting on the side of the bird bath without a care in the world. I was able to get a few inches away for some close up photos and it just gazed casually back at me. We had quite a conversation, although a bit one-sided, and I was able to recognise it as a juvenile greenfinch by the olive green head plumage, the distinctive finch-like beak and the yellow bars forming on the side wings and tail which are later used as a visual threat to other species.
It is strange to think that one day it will be as sleek as its male parent who was eating greedily nearby at the sunflower heart feeder and pecking at any other bird who dared to come near. 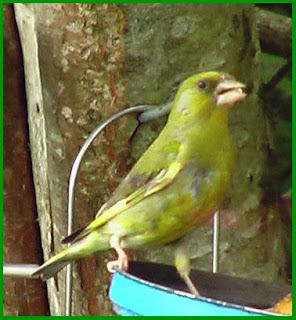 Posted by South Loch Ness Local at 2:18 pm No comments: 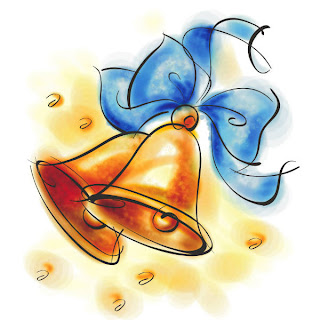 Tomorrow Ray and I celebrate our 39th Wedding Anniversary so we are having an anniversary weekend starting right now.......CHEERS everybody......
Posted by South Loch Ness Local at 3:05 pm 1 comment:

Donna and John, our guests staying in Aspenwood Cottage, celebrated their 25th Wedding Anniversary yesterday and we were kindly invited to join them in a toast. As we were enjoying drinks and a lovely cake in the lounge the magical sound of the bagpipes drifted down the driveway. We all went outside to watch and listen. As a surprise to Donna John had organised 'Spud the Piper' from Aviemore to come and play especially for her. We were all amazed listening to this talented man who is in great demand at various venues all over Scotland. He declined the champagne as he had another gig to attend and settled for a cuppa in the kitchen where we all had a good chat and laughs. 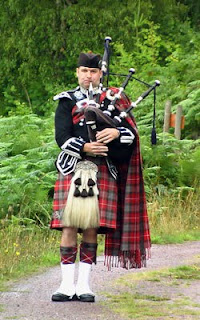 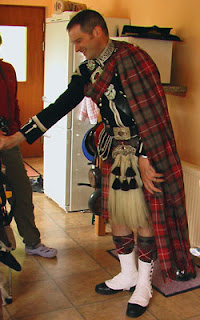 After a rendition of 'Flower of Scotland' we all waved him goodbye and watched him walk up the driveway to his car. A very good way to celebrate any special occasion .. so a big thank you Donna and John for letting us share it with you both.   Remember to put the sound on.
Posted by South Loch Ness Local at 5:23 pm No comments: 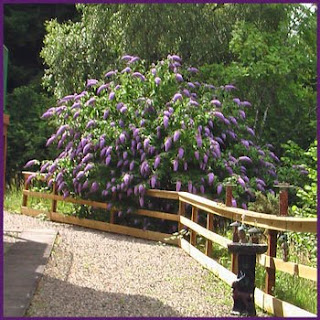 Driving down the lane to Aspenwood on Saturday we spotted a large male pheasant and a red squirrel on the top of the platform fence happily eating together. Unfortunately they soon heard us arriving and scarpered so you will have to imagine the scene. We also noticed that the purple buddleia to the left of the decking was now full of magnificent blooms. I did prune it back last year and worried that I might have done more harm than good but it seems in very good health and perfectly positioned by the decking. 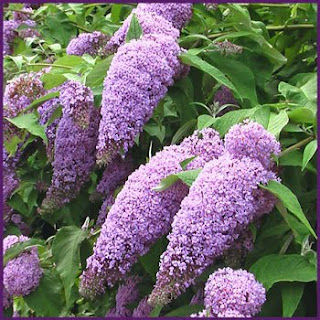 The week of September 18th to 25th is still available.
Posted by South Loch Ness Local at 1:52 pm No comments: 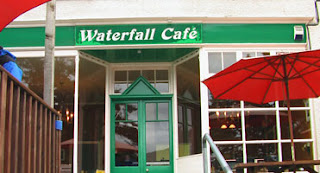 The new  Waterfall Cafe  opposite the Falls of Foyers in the village of Foyers [formally known as The Red Squirrel Cafe] opened again for business on Monday 2nd August.The cafe and adjoining Foyers stores are about three miles from Aspenwood on the road to Fort Augustus Several famous Foyers residents cut the ribbon at the opening ceremony. The new owners - Jan and Simon Hargreaves - live in the apartment above the cafe and stores and hope the cafe venue will once again be used as a community centre for the village. The large outside decking area allows diners to eat and enjoy the views and the inside of the cafe has been completely renovated during the past six months. Locally produced food including soup, cakes and fish will be sold on the premises which has housed a cafe for more than 100 years. The local squirrels have not been overlooked and feeding boxes for the red squirrels, commonly seen in the area, have been placed outside and will be regularly topped up with peanuts so everyone will remain happy now. 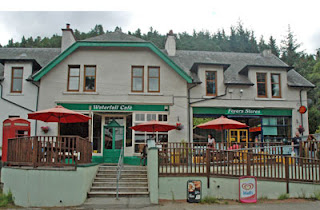 Posted by South Loch Ness Local at 4:57 pm No comments:

The weather lately has been warm and dry but rather overcast with the odd shower yet somehow the sun usually shines through in the evening about 7pm. As we sit outside in the evening reflecting over the very hectic events of the day we look forward to the deer joining us and watch them munch away at the grass on the front bank. 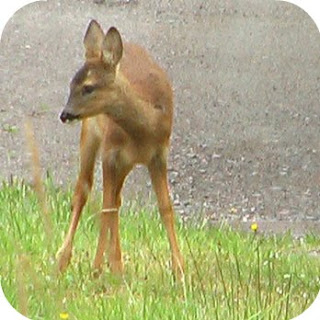 Sometimes one youngster appears on its long spindly legs soon to be followed by its sibling and then mother comes to check up on them - and us of course. 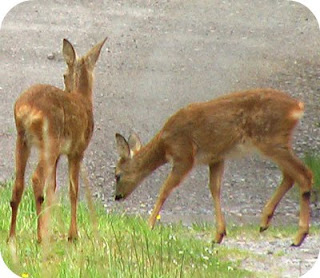 This family of three deer have been frequent visitors to the grass bank at the front of the house lochside and happily munch away together in the evening sunlight.Guests have said they have seen them up outside Aspenwood...so do keep looking out of the windows. 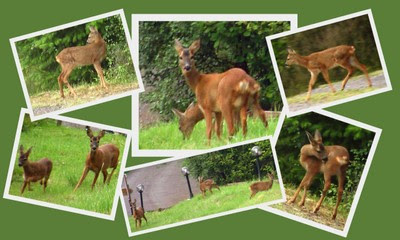 Posted by South Loch Ness Local at 5:52 pm No comments: